Las Vegas is known for its entertainment scene, but the city is much more than the entertainment capital & has some of the best event venues in the USA.

Unlike many convention cities across the world, Las Vegas stands out for its cutting-edge innovation and excellent options.

The Big League Dreams Las Vegas is a key sports complex that is best known for its indoor soccer pavilion. For indoor soccer players, this venue caters to players of all ages and abilities., with the sports complex also providing the option of slow pitch softball leagues. Other amenities at the complex include batting cages, a restaurant, as well as flag football fields.

The Las Vegas Convention Center, often abbreviated as LVCC, is one of the biggest convention venues, not just in the state, but also across the world. The center has spacious exhibit halls and 144 meeting rooms, with the latter having varying capacities between 20 and 2,500 visitors.

The Las Vegas Motor Speedway is a grand complex that has gained popularity over the years for hosting motorsport racing events. With nine distinct racing tracks to its name, the speedway hosts events such as drifting, short track racing, and the renowned NASCAR.

The Sports Center of Las Vegas is a multi-purpose venue that hosts a myriad of events, from sports to parties and exhibitions by players from different industries.

The Sands Expo Convention Center has almost become synonymous with Las Vegas events, thanks to its sheer size and notable events all year long. With five unique halls for exhibitors to choose from, non-conventional spaces designed to meet client’s choices, as well as proximity to the Palazzo and Venetian Hotels, the Sands Expo Center is a preferred Las Vegas venue.

For theatre and music lovers, some of the best Las Vegas venues include Zappos Theater, the Joint, and Pearl Theater. Other notable venues include the Orleans Arena, the Sam Boyd Stadium, as well as the Mandalay Bay Convention Center. The T-Mobile Arena is a large indoor arena located on the Las Vegas Strip. The multi-purpose facility was first opened in 2016 and is popularly known as the home of the Vegas Golden Knights, who play in the National... The Las Vegas Motor Speedway is a grand complex that boasts multiple motorsports racing tracks in Clark County. The speedway is located about 15 miles from the Las Vegas Strip – the perfect place for the... The Las Vegas Convention Center, commonly known as LVCC, is an iconic building located in the Winchester area of Las Vegas. As one of the largest convention centers in the world, the building’s operations are... The Nellis Air Force Base, often referred to as simply ‘Nellis,’ is a US Air force installation located in the southern part of Nevada. The base was previously known as the ‘Las Vegas Army Air... The Orleans Arena is a multi-purpose venue located at the Orleans Hotel and Casino in Las Vegas. The arena’s proximity to the Las Vegas Strip provides an ideal venue for some of the most popular sports... 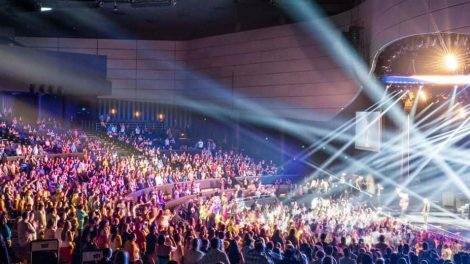 Zappos Theater, previously known as The AXIS Theater and the Aladdin Theatre for the Performing Arts, is a popular venue located at Planet Hollywood Las Vegas. The theatre frequently hosts popular concerts, awards... The Colosseum at Caesars Palace is an impressive venue located on Las Vegas’ iconic Strip and is the key entertainment venue at Caesars Palace. Owing to its amazing concert residencies by some of the world’s... The Cox Pavilion is a spacious indoor venue located in the Las Vegas Campus of the University of Nevada. The pavilion is a two-level structure that is home to the UNLV Lady Rebels (a women’s basketball team), in... The Mandalay Bay Convention Center is one of the largest convention centers in the world. The convention center, which is located in Paradise at the south end of the Las Vegas Strip, gives a whole new meaning to grand... World Market Center in Las Vegas is a stunning event destination whose space and convenience make it a must-explore when in the city. With more than five million square feet of space, the center houses furnishings for... The Thomas & Mack Center, located at the University of Nevada, is one of Las Vegas’ most popular arenas. It is best known as the home of the UNLV Runnin Rebels basketball team, as well as for holding world... The Laugh Factory in Las Vegas is a popular comedy club that regularly features both established names and upcoming comedians to entertain audiences at the Tropicana Las Vegas. The club, which is often referred to as... Brad Garrett’s Comedy Club gives Las Vegas visitors the chance to witness Brad Garrett perform live alongside some of the most popular acts in comedy. From veteran acts to new and upcoming artists, there is never... The L.A. Comedy Club promises an evening of pure indulgence and laughter from some of the city’s funniest comedians. The club, located at The STRAT Hotel, Casino & Skypod, is easily accessible at the top end of the... The Pearl Theater is Las Vegas’ premier concert venue located within the popular Palms Resort. The theater is spread across three levels and captures all the glamour and excitement of Las Vegas’... Big League Dreams Las Vegas is a popular sports complex located at 3151 E Washington Avenue in Las Vegas. The large park is known for hosting both soccer and softball games, drawing in sports lovers from all across the... The Cashman Center, also known as the Cashman Field Center, is a spacious venue that sits on 55 acres in Las Vegas and is managed and operated by the Las Vegas Convention and Visitors Authority. Initially, the center... The Las Vegas Live Comedy Club is home to some of the best stand-up comedy in Vegas. The club brings together seasoned comedians from across different states, making the club a must-visit while in town. This is the... The Sands Expo Convention Center is one of the largest convention centers in Las Vegas. The center was first opened in 1990 and has since hosted many conventions and events booked by the nearby Palazzo and Venetian...

The Las Vegas Little Theater is a community theater in Southern Nevada and is the oldest operational one of its kind in the valley. The theater was first established back in 1978 and has been in operating now for over... The Jokesters Comedy Club is a legendary Vegas attraction that is sure to have audiences roaring with laughter. The only night comedy club on Fremont Street, Jokesters showcases different acts every day for the comedy... The Pepsi Ice Arena (previously the SOBE Ice Arena) is a popular Las Vegas venue; one that has earned popularity over the years thanks to its ice-skating arena. The arena is a gem in the city and is perfect for visitors... The Arroyo Grande Sports Complex is a popular sports venue located in Henderson. The 56-acre property is accessible using entrances at both Santiago Drive and the American Pacific Drive. Home to an array of sports... The Keep Memory Alive Event Center is an extraordinary Las Vegas venue that provides the perfect location for a host of indoor and outdoor events. While the venue is best known for its spectacular settings, its charming... The Cheyenne Sports Complex is a 38-acre-large sporting venue located in North Las Vegas. Equipped with a lighted running/jogging track, 5 tennis courts, 3 soccer fields, and 4 baseball/softball fields, the complex is... The Historic Fifth Street School, also known as the Las Vegas Grammar School, is an iconic landmark in Las Vegas and is listed on the National Register of Historic Places, thanks to its historical significance in the...

The Las Vegas Academy of the Arts Performing Arts Center is a public magnet high school whose primary focus is on the diverse forms of art. The school was established in 1992 and as one of the largest schools in the...